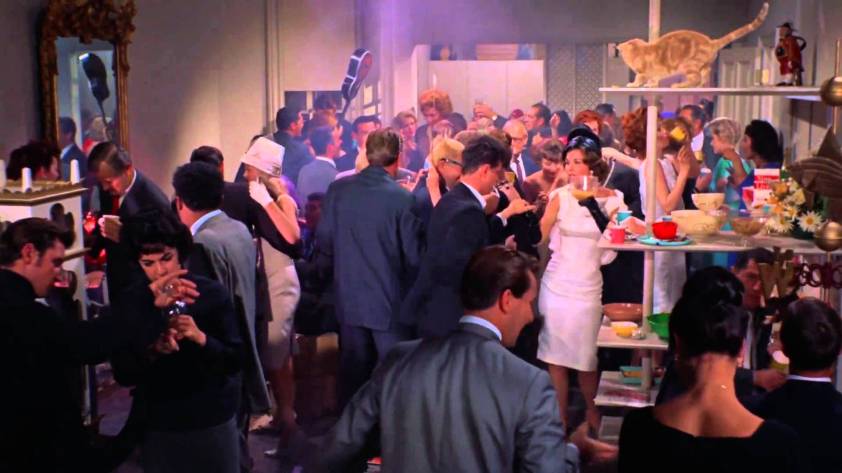 Back in September the New York Times published a piece named “Death To The Party.” When I read it I immediately thought how it’s not the party that died, but it’s the death of a good host that killed the party! The writer made some solid points, but I have to add that some parties I have attended left me wishing I stayed home.

In the article the author attributes the lack of parties to millennials, but I argue that GenXer aren’t exactly notorious for giving great parties anymore and the better parties I’ve attended have been those hosted by baby boomers. I think it’s because the baby boomer generation never abandoned the art of being a good host.

I love the movie, Breakfast At Tiffany’s and it has always been my inspiration for throwing parties. In it’s famous party scene Holly portrayed by Audrey Hepburn hosts a party where friends and strangers gather for a cocktail party in a small New York City apartment. As the evening progresses the gathering becomes lively. Conversations abound; gossip, business and who arrived with whom.

Holly, navigates the room in a signature little black dress, with a dramatically long cigarette holder, dashing in and out of random conversations and introducing a diverse room of people to one another. People she admittedly doesn’t know. A delivery guy shows up with re-enforcement’s, meaning a box of  liquor, bread and other musings to keep the party going. Who knows who paid for it? Who cares?

This iconic scene pulls the viewer into an epic NYC cocktail party. The kind we’d all like to stumble across or be haphazardly invited to. This is the energy  we have lost. In order to return to that type of  fun gathering, we must first ask ourselves what made that particular party so much fun?

In my opinion the host  sets the tone for a memorable evening. In this movie Holly, is as carefree as her party. She is not concerned with dirty dishes, or the type of food she is serving. She has supplied  LOTS of liquor and her guest didn’t expect much more than that.

Today’s host are so concerned with having the perfect Martha Stewart  food presentation and Pinterest worthy decor we  have lost focus of having a smashing good time.

It’s very easy to blame technology for the death of the house party but I argue that it’s the lack of hosting skills that has attendance on a sharp decline.

If you want to host a great party like Holly Golightly here are a few things to keep in mind.

BE EXCITED & CREATE BUZZ: Social media is not the culprit, it is a good tool for a host. It allows the party to being the moment you send out the invites. Currently, I’m part of two secret Facebook groups hosts created as invites to a party. The hosts and co-host are posting pictures, sharing ideas, making music list, and posting memories from parties of the past. In both cases, I feel like the party has already started!

This type of pre-party excitement gives your guest something to look forward to and reduces last minute cancelations.

BEGIN ON TIME & GREET YOUR GUEST: Your invite said 7pm and you’re just starting to set up at 8?  That’s not ok, especially when people have to pay for childcare, pull on a Spanx, and convince their partner to take a Call Of Duty break to attend your party. Part of being an adult is respecting the time of others.

A good host is prepared 30 minutes before guest arrive. It is customary to greet your guest at the door showered, dressed and ready to party! If you are placing last minute touches on the food or finishing up your make-up, have your co-host greet your guest on your behalf.

MUSIC & DANCING: When I moved to the suburbs it was quite common to attend a party with no music. I’m not sure why people have parties without dancing but it should be a main part of your party planning.

Your guest should hear music the moment they walk in. For about $10.00 you can subscribe to a few online streaming services and have a commercial free playlist going all night.  A party with no music is kind of boring. Even a classy conversational dinner party should be accompanied by jazz or classical music in the background.

JOIN YOUR GUEST: I once attended a party where the hostess spent the ENTIRE time in the kitchen and when asked if they needed help they turned it down never interacting with guest. This is a horrible display of manners. Not interacting with your guest is among the rudest party behaviors I’ve ever experienced.

People don’t care if you have chips and pizza, the entire point of attending a party is to spend time with the host and other guest. If you cannot do this then don’t throw a party. Seriously, it’s tacky as hell.

FUN & GAMES: Have you ever been to a party and people just stood around, wine in hand staring at one another not really knowing why you are all gathered together?

It’s the job of the host to keep the party moving. Sometimes there will be a lull and it’s good to have a game on hand. Even something as classic as charades can lead to unexpected mischief and hi-jinx! My favorite party game is Taboo and Head-Up.

DON’T SELL ANYTHING: There is nothing wrong with selling parties especially when the host lets you know up front that is why you are attending. Otherwise, I agree with the NYT article that “if you send out invites with an ulterior motive to get media coverage; it’s basically advertising.” and it’s plain rude.

Don’t be shy, push back the furniture and host a fabulous party! Dance and take plenty of pictures! You’re creating memories that last!