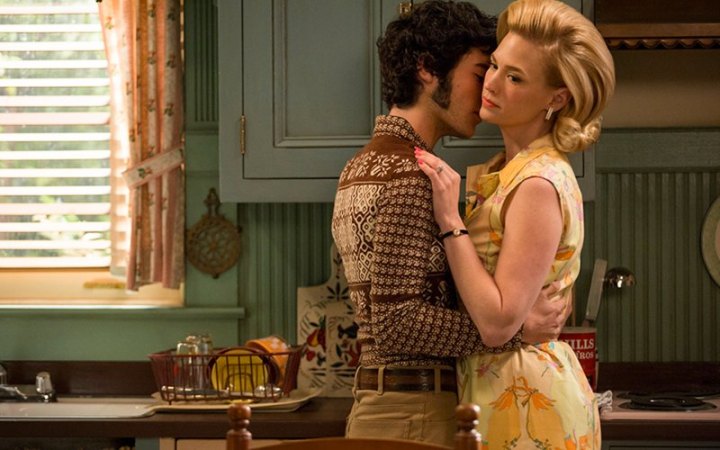 Well, Well, didn’t we get a treat last night when IMO one of the strangest characters showed up last night bringing with him the anguish of the Vietnam War, balanced with some Mrs. Robinson vibes.

Glen Bishop was introduced to us when Helen Bishop,(Darby Stanchfield) the newly divorced neighbor needed a sitter for her 9 year old son Glen played by Marten Holden Weiner.(Yes, Matthew Weiner’s son!) Glen develops what we thought was an innocent boys crush on Betty Draper until he deliberately watches her go to the bathroom then after she chastises him, he ask for a lock of her hair. Betty gives it to him as the audience is both mesmerized and uncomfortable by this relationship. Glen is the only one who can really see just how miserable Betty is and Betty loves every moment of it.

Glen then creates this triangle with the Draper women by becoming Sally’s confidant, in his mind he’s Sally’s stepfather but in her mind he’s cool and possibly a love interest, as they are closer in age. 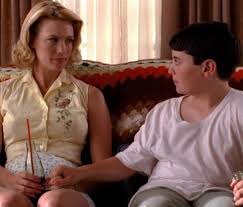 As the series continues Glen pops up as a reminder that while Don Draper and this privileged cast of characters are trying to figure out how not to be rich and miserable, Glen reminds us that there is world going on outside of this bubble. Like when he showed up at the Christmas Tree lot working for his dad. Then again at Sallys boarding school as her “cool connection” to alcohol.

Then , last night! Glen shows up in all his 18 year old manhood breezing by to pick up Sally, he’s looking so good with his side burns and bell bottoms that  Betty does not  recognize him. When she does she starts flipping her hair back and grinning like she was reunited with her 18 year old high school crush. Or like a middle aged woman who needed that boost of sexy.

Again reminding us that the world is spinning outside of the Draper bubble Glen showed with the announcement that he is going to Vietnam, while Sally upset by his decision turns to the young woman Glen arrived with and ask if she had anything to do with his decision.  “We just met” she exclaims reminding us of the free loving times. (not before she asked about some Grass) .

In the middle of the storm Glen creates he remains calm, fixated on Betty as she affirms his decision as the brave one, and he affirms her decision to go back to school. They always understood each other.

That’s why he came back the next day, when he knew Sally was gone, to make a move on Betty. The scene was innocent, sad and sexy and for as much as Betty enjoys the attention she always ultimately remembers she is the adult and reminds him that she is a married woman.

Betty, who has always been a dedicated Republican demonstrates her uncertainty about the war as she confiscates her middle son’s toy machine gun, and symbolically throws it away, after she gives him permission to watch the Brady Bunch before bed.

What did you think about this episode of Mad Men? What are your predictions for the end of the season?